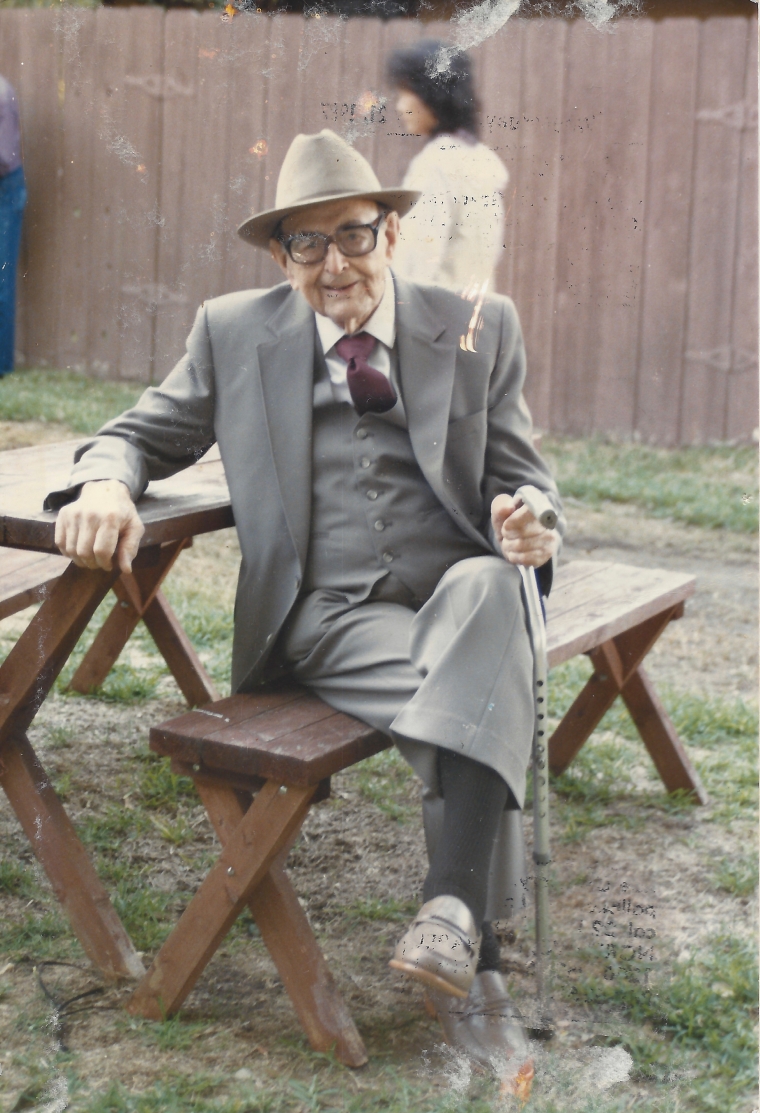 My husband used to have to wear a suit to work every day. Each morning he would don a newly laundered and starched shirt, arrange one of his ties from his vast collection around the collar, and select one of the suits that served as his uniform. When he retired he stored the suits in the back of the closet and rarely pulled one on save for funerals and the like. Eventually he noted that those symbols of his forty years of daily toil were probably at least fifteen or more years old and looking a bit threadbare. Besides he had recently lost fifty pounds and they hung on him like a tent. It was time to purchase a new suit.

I accompanied my man to the store for consultation and while he was being measured by the tailor I found myself laughing at a memory of my grandfather. Grandpa had purchased a brand new gray suit for his ninetieth birthday party. He sat regally among his family members wearing the trappings of a sharp dressed man including a hat that shielded his bald head from the burning rays of the sun. Someone took a photograph of him on that day that became a treasure for those of us who so loved him. It would always remind us of how gentlemanly he always carried himself and how handsome he was. He hardly looked his age in the image, nor did his countenance betray the hardships that he had endured over ninety decades. I vividly recall that he had joked that he had purchased the clothing both as a birthday suit and the outfit that he planned to wear to his own funeral. Ironically he lived to the grand old age of one hundred eight and as he neared his last days he would note that his suit was all worn out.

Doctors said that my grandfather’s longevity was due mostly to having good genes. Nonetheless I always believed it was because he had the spirit of a survivor. Somehow he managed to use the tragedies of his life to grow stronger rather than to brood over his sorrows. He never knew his mother who died twenty days after he was born and by his own admission his father was a heavy drinking reprobate who did not amount to much. He was essentially abandoned to the care of his grandmother, a widow, who left a very positive impression on him. They lived a somewhat isolated existence in the backwoods of Virginia and his stories of their time together brought a mischievous twinkle to his eyes. Sadly his grandmother died when he was only thirteen and he became a ward of the court until the judge appointed one of his uncles as his guardian. Around that time his birth father who was still very much alive contracted small pox and Grandpa went to care for him. Some of his best tales centered around that time and the primitive nature of medicine back then. His father miraculously survived the disease and my grandfather amazingly never contracted the illness in spite of its highly contagious nature.

My grandfather grew up quickly as so many young men did in that era. He was on his own well before he had left his teenage years. His education was minimal but he was a quick learner with a willingness to adapt to any situation. He began traveling around the country picking up work wherever he went. It was a tough and lonely life but not that different from the norm of that era. He found solace in drinking which lead him to follow in his father’s alcoholic footsteps. After one evening of heavy imbibing he felt particularly repulsed with himself and vowed to mend his ways. He never again touched even a drop of liquor demonstrating the strength of character that we all saw in him.

Grandpa was forty before he met my grandmother and married. She was the center of his life and whenever he spoke of her his face lit up with pure joy. He often called her his buddy and talked of how much fun they had even long after she had died. Together they had two children, one of whom was my father. They were quite proud of my dad. He was a brilliant man who was the first in his family to graduate from high school and then earn a college degree. They always referred to my daddy as a good boy, so it was quite devastating to both of them when he died when he was only thirty three years old.

My grandmother was never quite the same after her beloved son died. Grandpa did his best to make her happy and the two of them enjoyed tending to their farm in Arkansas but seven years after my father died my grandmother was diagnosed with terminal cancer. Grandpa moved her to Houston so that she would be nearer the medical care that she would need. He tended to her with loving care, watching his savings dwindle to nothing because of the huge expenses associated with her treatment. He was eighty eight years old when she died. His pockets were empty and he had to sell his home to pay all of the medical bills. He found a room to rent and the strength to carry on.

By the time that my grandfather was ninety years old and wearing his new suit in his birthday photo his worldly goods consisted of what he was wearing, a few other changes of clothing, some favorite books and magazines, and the pipe that he smoked as he sat in his favorite recliner reading or enchanting his many visitors with his tales of a time so different from the modern era. His mind was sharp as a tack and his sense of humor never wavered. Only now and again would he speak of feeling tired, and that mostly occurred when someone that he loved had died which was happening with greater greater frequency as the years continued.

Grandpa took great pride in being independent. He admired courageous people. He took care of himself, proudly living within his limited means. He was perennially optimistic even when times became tough. He would tell us of the Panic of 1893, which in his words was a depression even more horrific than the so called Great Depression of the twentieth century. He had seen the world convulsing through the Spanish American War, World War I, World War II, the Korean War and the war in Vietnam. He had witnessed the world at its best and its worst over and over again. He understood that there really is a circle of life that repeats itself at intervals. He believed in the brilliance and goodness of mankind because he had seen the changes again and again that set the world aright even as it sometimes teetered into chaos. He had learned that there is always a way to carry on even in the most horrific of times.

We sometimes act as though our present situation is somehow unique in the annals of history. We behave as if the end of times is somehow near. We complain that daily life is more terrible than it has ever been. We wish for quieter times and complain about how difficult things have become. If my grandfather were still here with us he would calmly suggest that the world is actually unfolding in ways that make it just a tiny bit better with each passing day. Every generation has had is share of troubles and woes, but ours occur against a backdrop of plenty that was not even dreamed of in earlier times. Our advances in medicine, education, science, technology and even social programs were astounding to my grandfather and made him feel hopeful even when things became quite difficult. My grandfather was certain that we were headed in the right direction even when we felt lost or had to take a circuitous route to get back on track. He was a patient man who in the end taught those of us who knew him how to remain strong and positive and most of all loving. When I think of him in his dapper suit and I take a deep breath and carry on.