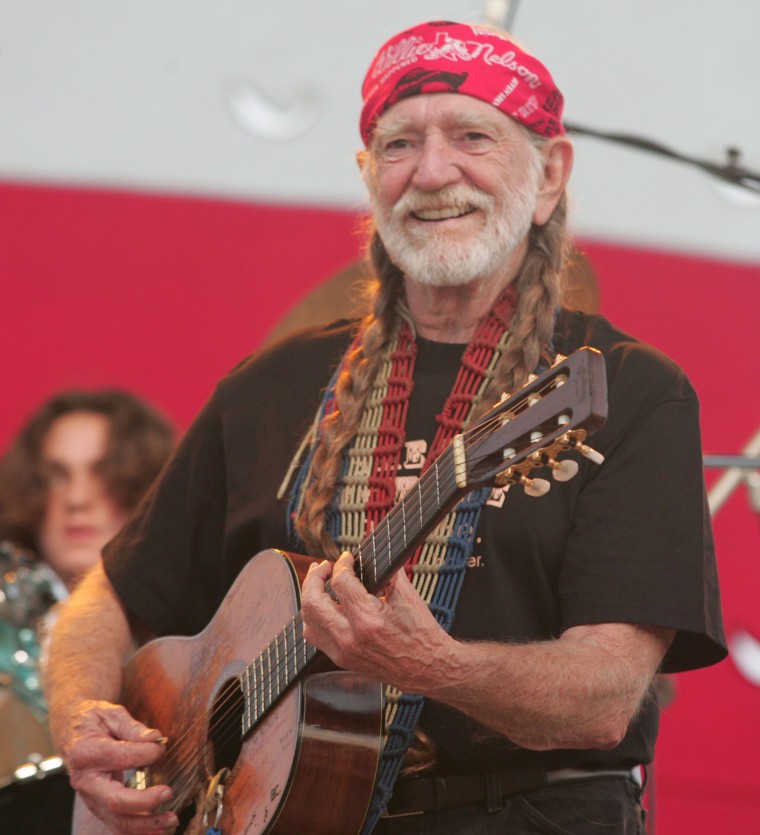 Willie Nelson did not look very good at the Country Music Awards earlier this month. He appeared to be having difficulty breathing as he sang Rainbow Connection. It was quite sad to see him struggling to do the very thing for which he has been such a star. Since I had tickets for his performance at the Smart Financial Center on November 18, my birthday, I was rather worried that watching him perform might be a sad occasion marking the beginning of his demise. He is eighty-six after all and not in the best of health. To my great joy the Willie Nelson that I saw that night was beyond spectacular.

From the moment that Willie stepped on the stage he was magical. His gray hair was woven into his trademark braids and he wore nothing fancy at all, just a teeshirt, some jeans, boots and a straw cowboy hat over his signature bandana. His face was carved with the deep wrinkles of time and the adventures and misadventures of his lifetime. His hands were bent and worn but they still made sweet music beat up old guitar, Trigger. His voice was strong, with no sign of the breathing trouble that seemed to plague him only days before. He sounded just like himself and he played with joyful enthusiasm sometimes urging the audience to sing along with him which we happily did.

His playlist included favorites like On the Road Again, Angel Flying Too Close to the Ground, and Mama, Don’t Let Your Babies Grow Up to Be Cowboys. He paid homage to old friends like Merle Haggard and Waylon Jennings with pieces that he had once sang with them. He poked fun at himself and those who believe that his time has passed with songs like Roll Me Up and Smoke When When I Die. He seemed to be having great fun proving the naysayers wrong while at the same time facing his own mortality. There was a bittersweet tone to his performance that brought both smiles and tears.

There were a few lucky folks who received priceless treasures as Willie tossed his cowboy hat into the audience and later threw out some bandanas as well. All of us fans were in awe of his talent and his stage presence. Somehow he made his performance seem so personal, so moving. With an amazing energy he literally went from one song to the next without taking a breather like some artists do. It was all so good that we would have liked to have him perform for hours but we all seemed to know that he had given us his all and when he walked away he looked tired but happy with himself. He enjoyed our adulation while at the same time seeming to be so humble.

Willie Nelson is a Texas treasure. As a young man he went to Nashville only to be told that he just didn’t have the right personality or voice to be a successful performer. Instead he wrote music for other singers, like Patsy Cline who made Crazy an iconic country western tune. Eventually he found his way back to Texas and the Austin music scene where he proved that he was commercially popular as a performer in his own right. In fact, his unique style, melodious voice, and uncanny ability to play the guitar made him a worldwide phenomenon.

Willie has never forgotten his Texas roots. He performs in front of a gigantic Texas flag, lives in Texas, and draws much of his material from his Texas experiences. His band is a family affair with few electronic devices beyond microphones. His little sister is on piano and other siblings and children accompany him as well. All he seems to need to create unforgettable music is his own guitar, a bit of percussion, a harmonica now and again, the piano, a big bass and a few other instruments here and there. Of course there is also his unique voice that is so enticing whether he’s singing about going to pot or describing the joys of love.

I have seen some great performers in my time, but I have to say that Willie Nelson remains at the top of my list. I felt that seeing him on my birthday was a very special gift that I will forevermore cherish. He is beautiful in his very essence. His hands strumming his guitar are a work of art. His face tells as much of a story as the lyrics of his songs. Willie Nelson is pure poetry. The stuff of legends, and I actually got to see him one more time.

As I grow older myself I realize that experiences are the true treasures of our lives. The trips to places far away, the occasions when we see or hear greatness are the things that we will remember at the end of the day. I have been blessed to have had so many wonderful moments. Seeing Willie Nelson is a thrill that will bring a smile to my face whenever I think of it. I wish that there were a way for me to express my undying gratitude to him for all of the joy that he has given me through the years. I love you, Willie andI hope that you will be able to do what you so obviously love to do for a long time more.