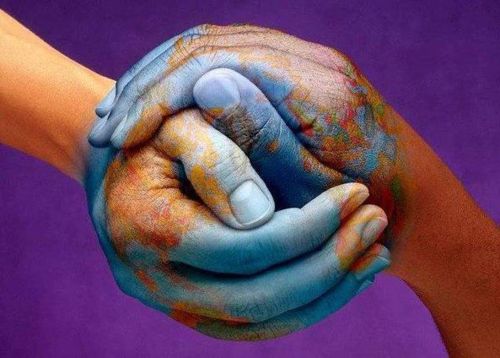 I am what is sometimes known as a people pleaser, not so much because I want to impress anyone with my goodness but because I have an uncanny ability to sense people’s feelings. I have spent most of my life striving to help others to be their best selves and making great effort to see differing points of view. My work has included titles like mother, teacher, peer facilitator, dean of faculty. In those roles I focused on walking hand in hand with my charges rather than being an authoritarian. I prefer being a diplomat to executing orders. To my utter dismay I more and more often find myself in a kind of new world order in which I am constantly challenged to choose a side or be considered outmoded and ineffective. The middle ground where I have long stood so that I might extend a hand to each side is now considered the choice of wimps, those unwilling to take a stand. I find it more and more difficult to please anyone and I am often accused of being the kind of person who has actually caused most of the problems of the world.

We appear to be in a phase during which manners and decency toward all is considered passé. Tough guys, bullies, those willing to hurl insults are thought to be the new saviors of the world. Being polite and soft spoken is out. Being brash is in. Passive resistance and peaceful assembly has lost its lure. Instead shouting and insistence that all agree to a kind of tandem manner of thinking is the way of the new heroes. Sound bites have replaced thoughtful discourse.

As a teenager I read John Kennedy’s Profiles In Courage with an almost reverential mindset. I saw the heroes that he described as role models for my own life. I liked the stories of fortitude in the lives of the saints that had so fascinated me as a child. I wanted more than anything to be a fair and just individual who held tightly to the belief that each of us has an important purpose in this world. I read and reread tales of men and women who changed the world without harming others. I came to believe that the most glorious aspect of living where I do is the unalienable right of individuals to have the liberty of their own thoughts. I enjoyed the idea of bridging gaps between diverse groups. It is who I am and what I do.

It seems as though a perverse stubbornness has invaded the world. We are at an impasse with one another. Society has become judgmental without taking the time to analyze situations devoid of prejudice. Our favored leaders often hurl insults at one another. We blame entire generations for our problems with sweeping pronouncements. Some taunt the “snowflakes” while others dismiss the “boomers” as the lot that has destroyed the earth. Anger is even invading families and rending friendships in two. There is a kind of worldwide psychosis that is making all of us sick.

It has become almost impossible for me to use my diplomatic skills. Of late I seem to anger everyone whenever I attempt to consider all sides of a discussion. My efforts are derided as useless and perhaps even counterproductive. I am reminded of how souls like Mitt Romney are not the heroes I think them to be, but spineless cowards who are of little use to the world. People are demanding action and those who attempt to broker compromise and peace are thought to be a large part of the world’s problems.

As a student of history I know how dangerous such thinking can be. While mankind divides itself into winners and losers suffering prevails. The power brokers unwilling to give an inch one way or another wreak havoc on innocents. Problems fester and grow in an atmosphere unwilling to consider compromise. When people no longer listen to one another grave mistakes are made. Divisions like north and south, left and right, red and blue, Christian and atheist, Sunni and Shia, Israeli and Palestinian, educated and uneducated, rich and poor are the sources of conflict and war. It is only when we truly attempt to work together that solutions begin to arise.

I was quite taken by an image that one of my friends posted on Christmas Day. In the photo were two women, sisters from a loving family. One of them stood in front a blue car with a “Warren” sticker and the other posed by a red car with a “Trump” sticker. Both women were laughing and obviously quite happy with one another, unwilling to allow their political differences to change their feelings of warmth and affection. It was a hopeful sign for me, a reminder that when all is said and done we humans may have differing opinions of how to solve problems but we are united by love.

I’d like to believe that our current state of rage is only a temporary phase and that the peacemakers will come into fashion again. In the meantime I pray that relationships that have been broken by differences in points of view may be mended. We need each other now more than ever. Life is far too short to spend time quibbling when we might be better off finding ways to get along. All it takes is a willingness to open our hearts and minds. Perhaps that is the best resolution that anyone might make for the new year and new decade of 2020.