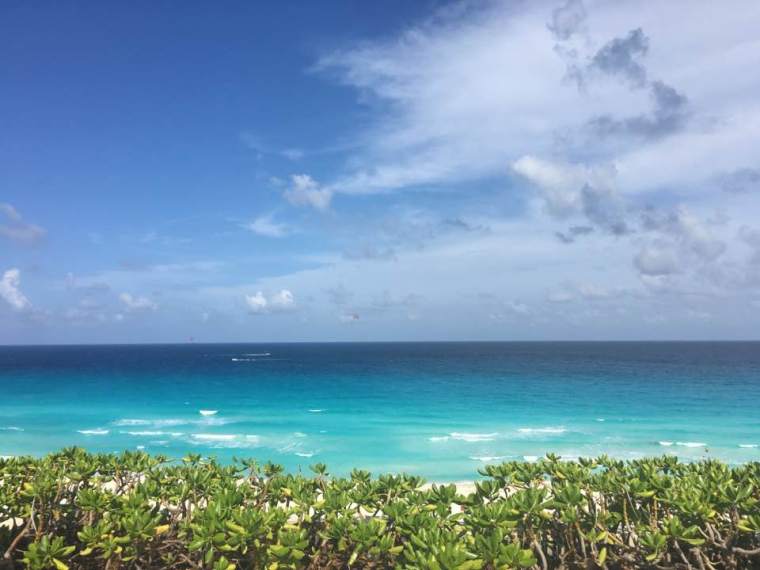 It is difficult to believe that as late as the nineteen sixties Cancun was little more than a sleepy fishing village with fewer than two hundred inhabitants. Today it is one of the most popular seaside tourist towns in Mexico and boasts a central hotel zone of immense resorts that are visited by people from all over the world. The population of the city has ballooned to well over a million citizens since it was first envisioned as a vacation mecca in nineteen seventy. The economic engine of the area depends on a huge service industry workforce that caters to every need of those who come in search of sun, sand and relaxation. Cancun is a place where even the common man or woman is made to feel like royalty.

The city is located near the easternmost tip of the Yucatan Peninsula and is graced by white sandy beaches and the colorful waters of the Caribbean Sea. It was once home to the great Mayan civilization and not far from the hotels ruins from the height of Mayan influence remain even to this day. Many of the local people are descendants of that unique and fascinating society which was ultimately decimated by drought, famine, disease, war and the brutality of colonization.

Among the many resorts in Cancun is Live Aqua, the hotel where my husband and I stayed for a few glorious days. The cost is all inclusive meaning that all of the food and drink as well as the room are part of the contract. It is a five star world class destination with spectacular views from the luxuriously appointed rooms. Ours featured a private balcony that looked out on the Caribbean. It had a mini-bar that the staff kept loaded with drinks and snacks, replenishing the stock multiple times a day. The bed was amazingly comfortable with sheets as soft as silk. There were enough drawers and closet space to hold our belongings without crowding. The bathroom was as large as an en suite and had both an oversized bathtub and a huge shower. It was stocked with specially scented soaps and toiletries as well as large bath towels. There was no skimping on the kind of details that make such environs feel more special than most.

From the moment that we arrived we became honored guests. A young woman named Jessica gave me a hand massage and brought us a special iced tea to drink along with cold cloths to freshen us and take away the sting of the summer heat. Soothing music played in the background and exotic scents filled the air while another beautiful and energetic employee named Carla put herself at our service. True to her word she became our go to helper for the duration of our stay, making certain that we had exactly what we needed at all times.

Live Aqua features many restaurants all of which offer delicious food served with impressive care. Siete is a buffet that is open most of the day to serve breakfast, lunch and dinner. It has an almost limitless number food choices to satisfy virtually anyone’s tastebuds. The Hidden Garden features asian cuisine that is high end and quite tasty. Mb is perhaps the most elegant of the places to eat and has a somewhat formal dress code. Its three course dinner is a sumptuous feast featuring soups like the habanero cream that literally melts on the tongue and desserts that perfectly end a memorable meal. The hotel also offers also outdoor dining near the multiple swimming pools and the sea. There are both alcoholic and nonalcoholic beverages everywhere being delivered by staff members who seem to have permanent smiles tattooed on their faces. No request goes unanswered at Live Aqua. The accommodations are extraordinary and the employees are trained to anticipate every possible need, all of which leads to a sense of well being and enjoyment.

For those who want a true resort experience there is also a spa offering everything from facials and massages to manicures and pedicures. A large and well equipped gym is available for those who want to maintain their exercise regimen. Chaise lounges with umbrellas line the pools and the beach as well as cabanas that are available for an extra rental fee. The best feature, however, is the beach itself. The water changes colors throughout the day ranging from a lovely sea green to aqua to an almost purple hue. The sand is soft and white and most of the time the sky is a deep and beautiful blue.

The government of Mexico is quite proud of this remarkable town and works hard to insure that tourists are safe from the cartels that have made visits to other parts of the country worrisome and unpredictable of late. There are guards even at the airport and great efforts are made to keep Cancun free of incidents that might discourage visitors from coming. There is a welcoming spirit everywhere one goes and so many events and interesting places that it would take days just to experience it all.

Live Aqua may at first glance appear to be a bit pricey but there are deals to be had. We found ours on Expedia but friends used other sources to get as much as forty percent off of the regular costs. It would be well worth the effort to search for special rates and then make a reservation for this truly remarkable place. I can promise that you will not be disappointed. I personally left feeling nourished and reenergized. The memories of my experience keep replaying in my head and bringing a smile to my face. I find myself mentally planning my next visit.

Quite frankly I arrived in Cancun doubtful that I would be all that impressed because I have experienced some very grand vacations in the past. I departed feeling as though my trip had indeed been one of my very best, not in small part due to the care and diligence of the staff at Live Aqua. I will be forever thankful for their friendliness, courtesy and never ending efforts to make my stay one worth every penny that I spent to be there. I look forward to the day when I return.