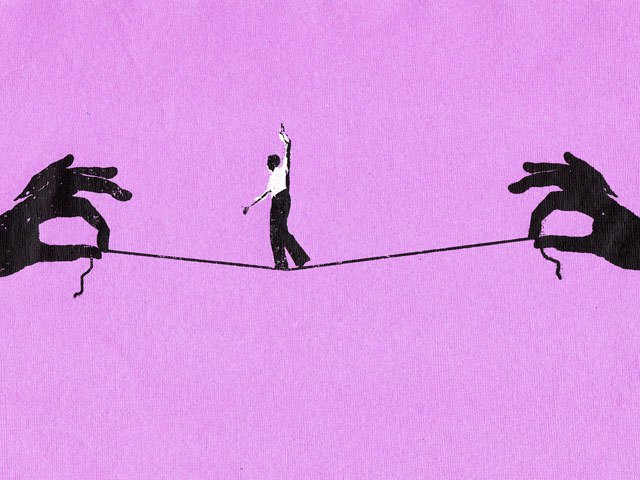 There it was, a meme that spoke to me more than I cared to admit. “You’re killing yourself for a job that would replace you if you dropped dead within a week.” It’s a rather simplistic thought that generalizes a bit too much, but it’s point is thought provoking. It’s main thrust might be applied to almost any situation in life with just a few changes of words. The fact is that we sometimes become so over involved in certain situations that we lose sight of what is really most important in our lives. Our work ethic overtakes us to the point of wearing us down, and then we grieve when we realize that perhaps our efforts were not appreciated nearly as much as we had thought. Finding that sweet spot that allows us to achieve balance in our lives is one of our greatest challenges, and one that is far more important than we might imagine.

We are taught the importance of hard work from the time that we are quite young. In today’s world those lessons begin earlier and earlier as very small children are enrolled in early education programs, sports clubs, music lessons and a host of activities that keep them busy from the time that they awake until they fall into their beds at night. Some tiny children have an endless round of appointments designed to develop the best of their talents. Parents and nannies help them adhere to carefully orchestrated schedules. Admittedly there are many children who thrive in such circumstances, but there are others who begin to show signs of stress in the form of crying fits, behavior changes and exhaustion.

I have seen such children hanging limply onto their parents with vacant looks and sometimes even fear. When I worked in an after school program for pre-schoolers and kindergartners it was sometimes difficult to keep them awake because they were so tired. Many of them had arrived at the school at seven in the morning and would not be picked up by their parents until six in the evening. They were grumpy and probably would have benefitted more from play time at home than the all day structure that ruled their little lives. Smaller doses of opportunity generally work better for little ones, but we all too often adopt a more is better philosophy forgetting that all of us need respite from the daily grind now and then.

As children grow older the demands on their time and energy only increase. Not only do we plan their hours, but we also introduce them to the glories of competitiveness. We expect them to perfect their skills and talents so that they will eventually become champions. Of course there is nothing innately wrong with that, but often in our quest to help them to become their best selves we over extend them so that their hours are filled, leaving them with little time to explore and create on their own. Sometimes down time can be more powerful in helping youngsters to begin to know themselves than keeping them so busy that they can’t really think, It is when they are on their own that they organically develop and learn through trial and error.

By high school the pressure on our teens can be overwhelming. Not only are they expected to do well academically in as many Advanced Placement classes as possible, but also to participate in extracurricular activities and community service. As one young man recently noted, they generally have about seven hours to themselves each evening if they stay up until midnight, less if they go to bed earlier. If they are involved in athletics or other organizations that number of hours may be reduced by two or four hours each day, leaving them only a short amount of time to study and just relax and be a teenager. Research has shown that most high school students are sleep deprived from attempting to pack so much into their daily schedules.

One of my grandsons decided on his own to remedy the trend of over extending. While he was in high school he achieved balance by carefully limiting the number of activities and advanced classes in which he was willing to participate. He realized that he was more often enriched by discussions at the family dinner table or late night intellectual conversations with his father and older brother. He understood the importance of quiet times without obligations attached to them. He saw that far too many of his peers were crashing and burning because they were carrying way too much excess baggage on their shoulders.

When we finally go to work we want to impress our supervisors as well as our peers. We are often willing to go an extra mile to demonstrate our loyalty, which is all well and good if we also remember our own personal needs. When our job becomes an obsession then we may want to step back just a bit. if we see that family and friends are suffering because we are continually absent, a real problem is beginning to brew. When we can’t even rest without dwelling on our work, we may have become over involved.

I’m not particularly someone to give advice regarding work life balance because there were multiple instances when I became so focused on studies or work that I totally neglected those who really loved me. I have been competitive to the extreme at times, and sadly my efforts were not always noted and appreciated by my superiors. Luckily those dearest to me were always there to pick up the pieces of my disappointments. At some point along my journey I finally managed to find a kind of work/life balance that made me far healthier than I had ever before been.

I am a living example of someone who looked outward and did my best to impress people who no doubt would have quickly found a substitute for me had I dropped dead. I worked so hard to be the valedictorian of my high school that I missed many of the joys of friendship and adventure that are an integral part of growing up. My achievement was soon forgotten and I found myself having to prove my mettle again and again in real life. I strove to be that person who demonstrated a willingness to be the last woman standing in pursuit of the goals of those for whom I worked. When others went home, I stayed behind to help, sometimes even when my own children needed me to be with them. I regret that I pushed myself so hard, but I am also thankful for dear friends like Pat and Bill who gently counseled me to learn how to focus on what was most important in my life. With such guidance and the support of my family I eventually found ways to have it all. I was able to clock out from work and leave it behind while I luxuriated in the warmth of home. It took me far too long to get there.

If I had one bit of advice for young men and women who are just beginning their careers or for new parents it would be to follow the wisdom of one of my teachers from long ago. He told us that we all needed to be fully present in whatever we were doing, never allowing ourselves to dwell on other things that were bearing down on us. He emphasized that we should work hard and play hard with equal vigor. He cautioned us to adjust whenever we found ourselves too preoccupied with any one thing. Keeping that balance, he suggested, would make us both healthy and happy. His was a message that all of us would do well to hear. Unfortunately I ignored his message for far too long. I’m glad I finally got my head on straight.