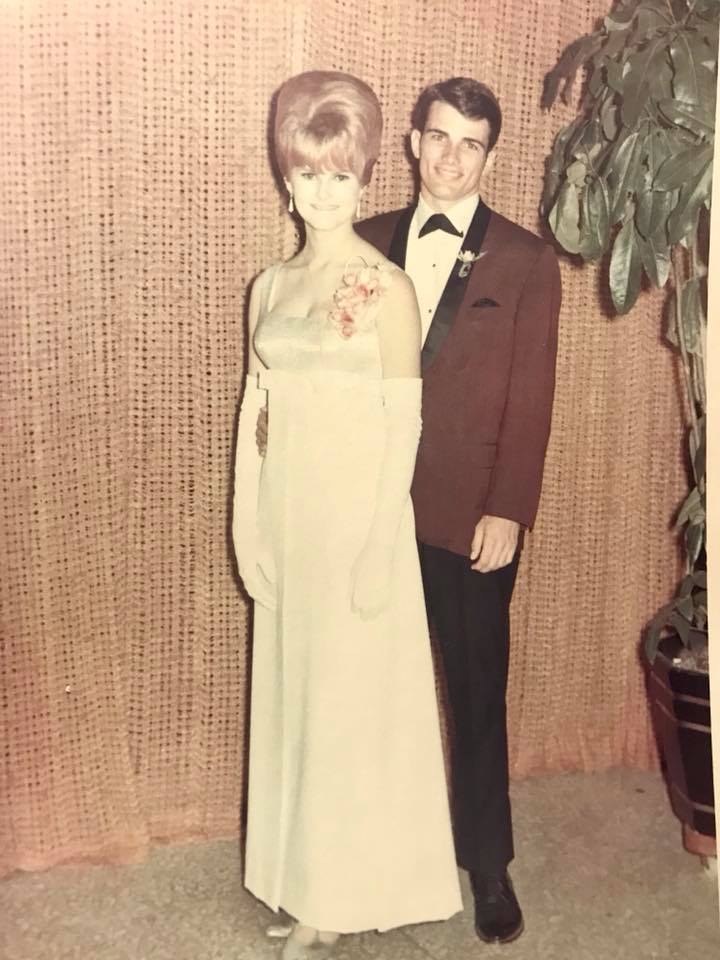 Growing up as a child I was lucky enough to live in a neighborhood where families came to stay. It was a rarity to see someone move. For that reason I went to school with many of the same kids from the second grade all the way until I graduated from high school. Among those who grew up with me were a set of twins, Terry and Tommy King.

At the time I thought that they were unique. I had never before seen two people who looked so much alike. It didn’t occur to me that I would one day have two sets of twin grandchildren of my own. Back then Terry and Tommy were like royalty in my mind. They were both handsome, athletic, highly intelligent, and best of all very kind. I suppose that I was not the the only girl in my class who had a crush on one or the other of the duo. By high school, however, it became quite apparent that Terry was already head over heals for a beautiful girl named Dixie.

I didn’t know Dixie very well but whenever she accompanied Terry somewhere she seemed to be a very sweet and gentle person much as he was. I liked her very much and thought that Terry had found a wonderful girlfriend. It was obvious that he was quite taken by her and I wished him well in my heart because he had always been so considerate and gentlemanly to virtually everyone. I was not surprised at all that he was the Vice President of our student body, or that he co-captained the football team. He was not just good at everything, but he was also humble about the many positive attributes that he possessed. It seemed very right that he had found a gorgeous girl like Dixie and that the two of them appeared to be so perfect together.

We graduated from high school in 1966, and went our separate ways. I went to a couple of early reunions but thenI would not see Terry again until we were planning our fiftieth high school reunion. I had learned that he had married Dixie and that they lived not far from where it did, but somehow our paths didn’t cross. All the while he was living out his life with Dixie and I was living mine.

Terry’s wedding to Dixie was fifty years ago this month. Over the years the two of them created a family and even built a thriving business that took advantage of Dixie’s talents. Mostly their love grew ever stronger, and whenever Terry spoke of Dixie his eyes would light up with affection and pride. Whether having fun or facing disappointments and tragedies they were a team.

Spending a lifetime with another person can indeed be challenging, but somehow Terry and Dixie made it seem easy. Nonetheless, as their daughter describes their journey it took love, commitment, hard work and a never ending sense of family to keep moving forward together. Just as when he was young, Terry along with Dixie was a rousing success at being married. My guess is that he and Dixie knew when it how to balance the serious aspects of a relationship with those that are just plain fun. They have enjoyed decades of friendship with each other and with other couples with whom they laugh and share all of the ups and downs of living. Their mutual reverence for one another, family and friends is truly an inspiration.

I was quite touched when Terry and Dixie’s daughter posted a beautiful tribute to her parents on Facebook complete with a number of photographs of the couple on their wedding day and at various functions over the years. In each and every image the couple fairly glowed with the love that they felt for one another. They were as beautiful as celebrities. Even more wonderful was a comment that Terry left under one particular picture, “She still takes my breath away.”

Sometimes it seems as though the idea of loyalty to a single person for a lifetime has become almost old fashioned. Affairs and divorces are commonplace. It is a truly inspiring thing to see two people so in love after five decades. Our world would do well have have more people like Terry and Dixie to show us the wonder of an unwavering relationship. Through their union the world has been just a bit better than it might have been. Their children and grandchildren will certainly attest to that, but so do those of us lucky enough to know them as friends.

Terry has always been a fine person. He found a woman who matched his attributes and together they have been even more remarkable. All of us who know them send our congratulations on fifty years of growing together in age and in grace. May they enjoy many more.