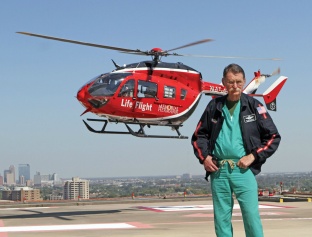 Years ago the daughter of a friend was traveling down Beltway 8 on a lovely Saturday morning when the driver of an eighteen wheeler lost control of his rig and slammed into the young woman’s car. The wreckage was horrendous and when the first responders arrived they realized that the passenger in the car was near death. They immediately requested the aid of the Life Flight helicopter which arrived quickly and then transported my friend’s daughter to Memorial Hermann Hospital in the Houston Medical Center. Dr. James “Red” Duke and his team were on call in the trauma center and they immediately swung into action. With a lifetime of knowledge the good doctor used his skills to virtually bring the severely injured woman back to life. Her wounds were so life threatening that in another place and time she might have died. Instead she was under the care of one of the premier trauma surgeons in the world. She lived to tell her story in spite of the odds against her survival.

I had known of Dr. “Red” Duke from his television appearances. He was a quintessential Texan with his unaffected drawl and his folksy ways. He wore round wire rimmed spectacles and sported a bushy beard that seemed to go quite naturally with his curly red hair. I enjoyed hearing him explain the mysteries of the human body and the wonders of modern day medicine. He was a likable character with a charisma that was pure down home and friendly. I had little idea what a remarkable man he actually was. It was only after my friend related the terrifying tale of her daughter’s car accident that I became a bit more curious about Dr. Duke and wanted to learn more about him. I was stunned when I finally did some research.

Dr. Duke grew up in Ennis, Texas. He attended Texas A&M University and was so popular on campus that he earned the coveted position of head yell leader. He followed up his undergraduate degree with a foray into religious studies where he earned a divinity degree. While studying theology he became enthralled with stories about the work Dr. Albert Schweitzer in Africa. It was then that “Red” Duke decided to become a doctor. He too wanted to become involved in the public health of ordinary and sometimes forgotten people.

Dr. Duke studied at the University of Texas Southwestern Medical School and did his residency at Parkland Hospital. He was in the emergency room on the fateful November day when President John F. Kennedy and Governor John Connally were brought in after they had both been shot while in a motorcade. Dr. Duke was credited with saving the life of Governor Connally who would express his everlasting gratitude to the then young doctor.

Dr. Duke eventually came to the Houston Medical Center where he ultimately became a beloved and highly respected member of the community. It was Dr. Duke who set up the first Life Flight services for the Houston area. He was also responsible for making the Memorial Hermann trauma center one of the most efficient and successful in the United States. If not for Dr. Duke and his tireless work I suspect that my friend’s daughter and so many more Houstonians might have died from their injuries.

My doctors always told me that if I were ever severely injured I needed to insist on being taken the the hospital where Dr. “Red” Duke and his team worked. Over time Dr. Duke trained thousands of young physicians in the cutting edge methodologies of the modern day trauma center. His influence has spread across the globe.

The most amazing thing about Dr. James “Red” Duke is that he was always a very good and decent man. After he saved my friend’s daughter he took a great deal of time to lovingly speak with the family. He checked on them and his patient over and over again and made it very clear that he would be available to all of them whenever they had questions or concerns. He was true to his word in every way and made my friend feel that he was a servant to their needs.

Everyone who was ever in contact with Dr. Duke has similar stories of his compassion and genuineness. In spite of all of the demands on his time and talent he always seemed to bring a personally caring touch to his practice of medicine. In many ways he was like the old country doctor who was known and loved by everyone in town.

We all watched Dr. Duke on television and remember his signature sign off, “This is Dr. “Red” Duke from the University of Texas Health Science Center.” I for one always took him at his word and believed that he truly cared about me even though we had never met. There was something quite special about his ability to transcend the impersonal and give the impression that every person was important to him. I suspect that it was because we all were in fact his patients and he truly did want to make a difference in our lives.

Dr. James “Red” Duke died yesterday. He will be missed by our entire city. There are thousands of people like my friend’s daughter who owe their very lives to him. There are thousands more who are happy and healthy today because of the innovations that he brought to our town. There are even more who received cutting edge care because of his influence on the study of medicine. Most importantly he understood how to blend his extraordinary skill with his passionate love for humanity. It is fitting that an elementary school not far from my home bears his name. The children who learn there should forever be aware of the incredible man whose spirit will no doubt resonate through the hallways of the school and through our city forever.

We’ve been quite fortunate in Houston to be benefactors of greatness from individuals like M.D. Anderson, Denton Cooley, and so many other brilliant people who have made the Texas Medical Center a mecca for the sick and suffering from around the world. Dr. James “Red” Duke stands as tall as any of the giants. We will be forever grateful for the work that he did.