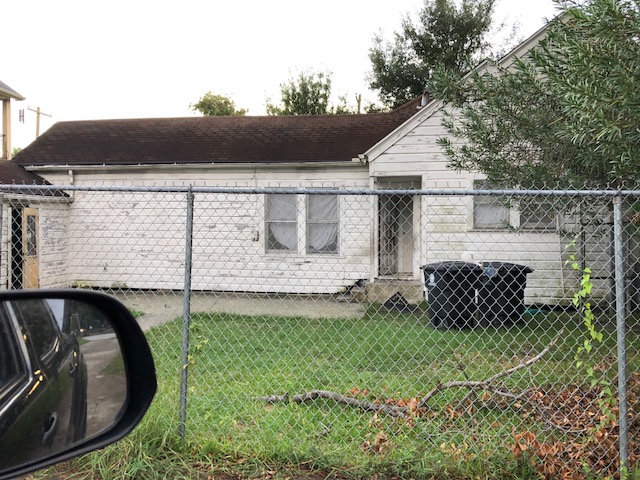 The husband loved his wife and his little daughter so much that he wanted to show his feelings by crafting a strong and beautiful home for them. He ran concrete piers deep into the gumbo like ground, wanting to avoid the shifting motions of the earth in that part of Texas. This would be a place of security, a symbol of just how much he cared for his family. Once the foundation was set, he created a pretty bungalow with curved doorways, warm wooden floors, and windows to allow the sun to lighten each room. It was small, but elegant, a place designed for gatherings of friends and brothers and sisters. It stood on a large lot shaded by trees and within view of the rest of the family homestead. Everyone agreed that it was beautiful, and best of all it made the man’s wife and child smile.

It would be the site for so many gatherings, celebrations, parties, and even times of sadness. It weathered storms, hurricanes, summer heat, icy winter mornings. Inside the family felt comfortable and safe even as life began to change. The man was quite young when he had his accident, a crazy thing really. He fell out of a tree and broke his back. He developed a dangerous infection but could not take the penicillin that might have cured him because he was allergic. He died with so little warning, leaving his wife and daughter bereft and wondering how they would manage without him. They grieved inside the house that he built until they somehow found the healing that they needed. They went on with their lives and the house stood as magnificently as ever.

The man’s wife rose to the challenges set before her. She helped to continue the business that he had built with his brothers. They worked in a back room of that house, loving and laughing and taking care of one another. The daughter grew into a beautiful woman. She set out on her own in a house nearby. She began a family and had a son. Now the rooms were filled with the sounds of play each day as the little boy spent hours with his grandmother. It was still the happy place that the now gone husband had hoped it would be. His memory lived in those rooms.

In a kind of classic love story the beloved wife seemed to long for her husband even as she carried on with courage. She one day discovered that a cancer grew in her body. She was still a young and energetic grandmother, but not able to fight the disease which overtook her body. She died and all who knew her were devastated, wondering how it would be possible to continue her legacy of compassion, love and laughter. They gathered in the house to mourn her and to recall the love that they had shared there.

The daughter moved into her mother’s house. She and her husband and son continued the traditions that her parents had so honored. The house was still as lovely as it had ever been, but the neighborhood had begun to change. Where there had once been a little forest of trees leading to a bayou, an interstate highway had been erected. Neighbors slowly began to move to suburbs far from the center of town. The view of the business district that was only a few miles away began to be dominated by gigantic skyscrapers. The town became a city growing around the little bungalow with a vengeance. Still inside those walls the daughter and her family lived life just as her father had hoped.

The boy grew and fell in love and married, moving to the other side of the city. He and his wife often visited the little house. They loved the Sunday dinners, the Thanksgiving and Christmas celebrations, and the quieter times when the boy watched football with his dad and his wife enjoyed tea and conversation with his mom in the gracious dining room of the house.

Eventually there were more children crawling on the gleaming floors and playing happily with their grandparents. They especially enjoyed the times when they slept over and stayed in the room that had once been their grandmother’s and then their father’s. They heard stories of the original owners of the house and played dress up with hats that had belonged to their great grandmother.

Progress moved farther and farther from the center of the city. The streets near the little bungalow grew dangerous. Crime became a way of life. It was time to leave. The bungalow would become a rental, with hopes that one day the area would become as glorious as it had once been. The lovely rooms were emptied of the family treasures, but the walls retained memories of the wonderful times that had gone before.

Things began to fall apart for the house and the places around it. The people who rented it did not love it. They broke its windows and punched holes in its walls. They did not know how precious it had once been. It was only a way station for them, a place to stop over on the route to something better. In many ways the house and the neighborhood around it became unrecognizable to the members of the family who had at one time enjoyed and appreciated its history.

The husband’s daughter died and left the house to her son, who dreamed for a time of making it a wonderful place to live again. Such reveries never came to pass. There were drug dealers walking on the once placid streets, derelicts lounging on the curbs. At night it was a dangerous place where crimes were commonplace. Still, the boy kept the house even as he watched it sag and saw the damage that renters had inflicted on it. He grew older than his grandfather had been at the time of his death. He made repairs on the house and had to struggle with renters who would not pay. It became an onerous task to keep the house alive, and so one day he decided that it was time to sell it to someone else.

He found a buyer, someone who wanted to build his own dream on the land. The house would be torn down. There was a kind of sadness about the whole affair. As the boy walked through the rooms he saw that the little bungalow was past its time. To revive it would be costly. In some ways it would be merciful to just let it go, to rejoice in the memories of its happier days.

The husband who built that house looked down and smiled at the boy who had been his grandson. He approved. He understood that to everything there is a season and the time for the bungalow had passed. The land was not the same as it had been when he created the place with such great care and love. He would smile that the boy had tried so hard to keep it alive, but he also knew that the little house that was his gift had changed long ago.

The boy and his wife walked through the rooms one last time before surrendering the keys. The floors were scuffed and dirty but still so strong. They heard the voices and the laughter of the people who had once passed through the rooms. The house groaned and creaked and spoke of how old it felt. It told the boy that it was time to let go. It was the love that made that house, and that love lives on , not in walls and floors but in the boy’s heart.