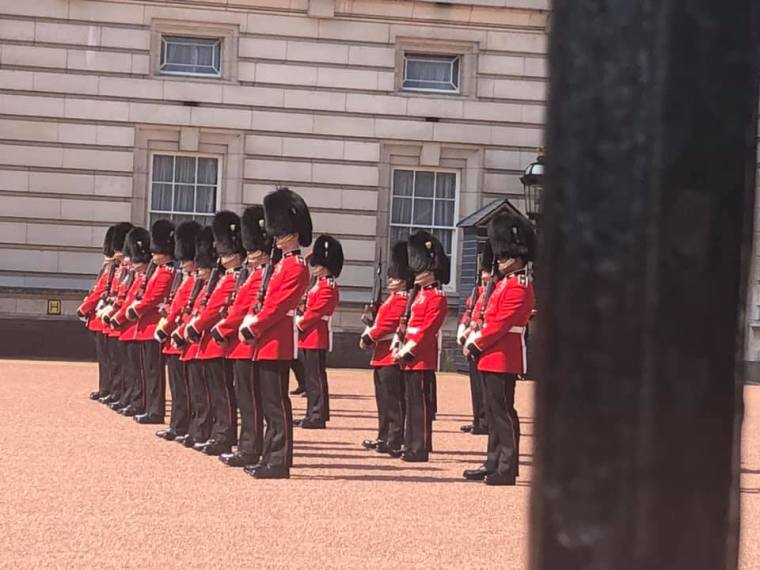 Ironclad plans for a trip are fine until they fail. One of the most positive aspects of traveling independently is the ability to make last minute corrections. Such was our decision one morning at breakfast when we realized that if we hurried over to the Russell Square underground station and headed for Buckingham Palace we might be just in time to see the changing of the guard that was to be held that morning. After all the rest of our day was dedicated to places where there was no need of tickets, so we had all of the flexibility that we needed. We took a deep breath, entered the fray of early morning crowds headed to work and girded our loins for whatever we might find ahead.

The train was so packed that we felt like sardines and it only became worse as we drew closer to our destination. Our foray inside a crowded train would be good practice for the swarm of humanity that we would find waiting at the gates to Buckingham Palace. We realized immediately that we would not get a prime view of the proceedings, but at least we were there and we’d have to just do our best to catch a glimpse of the proceedings here and there.

Unfortunately most of the best spots right along the fence line were taken by very tall men who further blocked the view by raising their arms to hold their cameras high in the air. Husband Mike and my brothers had no trouble looking over the shoulders of the lucky ones who had arrived early enough to stake out a claim to prime property, but my sisters-in-law and I were unable to see much even when we stood on tippy toe. Sister-in-law Becky decided to choose a different point of view and went to the very back of the crowd so that she might see the troops as they marched into the palace grounds. Allison and I found ways of glancing down low and in between the bodies of those who blocked our normal sight of vision. All in all it was a frustrating situation but one that we learned how to eventually make work.

By the time the proceedings began the area was a mass of humanity all craning their necks to see the red coated military men marching proudly across the grounds. They played traditional pieces that most of us had expected to hear, so a sense of great satisfaction swelled over the crowd. I saw enough of the upper half of their bodies to feel a sense of exhilaration, and I had perfected my method of finding tiny holes in the wall of people to make me feel as though I was part of something quite grand.

Standing on my toes and bending down became my official “modus operandi” so I hardly noticed that people from behind were pushing forward to get a view of their own. A woman who had a birds eye view in the front row suddenly became overcome by claustrophobia and decided to leave. Before doing so she offered her spot to me. I could not believe my good fortune as I suddenly stood right behind the fence along with the row of tall men. I was mesmerized by the sheer beauty of what I saw.

The soldiers with their red jackets and polished brass buttons stood tall and stately with their heads proudly bearing the black bearskin helmets that are the trademark of their station and their duties. I saw that they were not just showmen because the guns that they carried were real and quite powerful. They were indeed trained and equipped to be guards. I later learned that many of them had served in dangerous places like Afghanistan. Their precision bespoke of discipline and pride in their work. I was almost giddy at the wondrous sight that I was watching unfold. It was as though I was part of a living fairytale not unlike the ones that my father had so often read to me. I felt like Cinderella.

We were entertained by military songs and modern music, marching, and even a mounted cavalry wearing riding boots and a different sort of cap featuring horse hair. The pageantry was even more glorious than I had imagined it would be and my companions and I were quite delighted.

As is my way I found myself thinking of the rag tag revolutionaries of the colonies of north America who had the audacity to rebel against such a well trained and disciplined army of red coats back in the eighteenth century. It must have required an enormous amount of frustration over the political situation to risk fighting such a group. Little wonder that the prevailing belief was that the so called patriots would soon be put down by the seemingly superior forces and normalcy would return. I’m not so sure that I would have had the courage to side against such a powerful army, and yet I know from the study of my family tree that there were indeed ancestors who chose to join the revolution to free themselves from what felt like tyranny.

I suppose that we Yanks are the wild children of Great Britain. We came from the same stock but the new world changed us. We were far enough away from the old ways that we began to question the authority of a king who was making our lives more and more difficult. We had risk taking in our DNA. Our thinking diverged from the land of our origin and in the end we eschewed royalty and opted for freedom, even though our first form of it was far from perfect. It would take some time before we freed our slaves and allowed women to move to the front so that they too might participate in the grand experiment of the republic.

My spot along the fence of Buckingham Palace standing as an equal to the big tall men who had at first blocked my view felt like yet another metaphor for how far I have come from the time of my ancestors. I have roots in Great Britain that make me proud, but in the end I am a foreigner in that land. Neither I nor anyone not born of the Windsor family will ever be royal, but in my country anyone might aspire to be President. That is the grand difference that came from the revolution of long ago.

I possess all of the traits of an American including great pride in my country and a kind of brash sense of equality with every other human, but I still cherish the traditions of my history. I felt a kinship and a sense of friendship as I watched the ceremony unfolding before me, knowing also that I would not have been standing there were it not for the opportunities that the United States has given me. God bless America and God save the Queen!