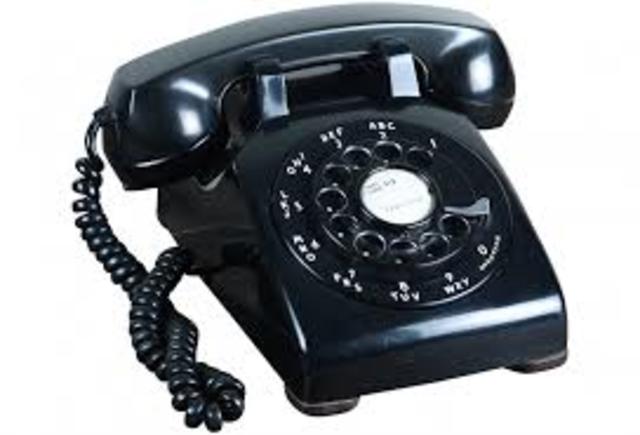 I was recently reminded of the time when I was a teenager and every home had one phone that was usually attached to a wall in the hallway of the home. It’s central location was designed to make it accessible to everyone in the family who needed to use it. It also made every conversation a bit more public than one might desire, especially a high schooler intent on talking privately with a friend.

When I was still a small child my mom and dad purchased a bench with a couple of built in shelves that held the family phone and a couple of ginormous directories that supplied the numbers of individuals and businesses. Someone had gone to a great deal of trouble to make the strange piece of furniture look attractive with its mahogany finish on the wood and brocade upholstery on the seat. Our family kept it dusted and our mom swept under its legs regularly to insure that it appeared to be a purposeful and attractive addition to our home’s decorating scheme. In spite of its important function it never looked quite right.

I vividly recall a time when our phone was on a party line which other neighbors shared. It was not unusual at all to pick up the receiver only to hear the voice of the lady next door babbling away with a friend. In such cases making a call became a game of first come first serve unless there was an emergency. We had to wait patiently for the line to become free and so my mom instructed me in the etiquette of sharing phone time with others. It required a quick hang up at the first sound of other voices using the services and a pledge to never reveal what might have been heard in the brief second of listening. It was indeed a rather strange situation that only lasted during my earliest childhood years.

My family moved the telephone bench from one home to another, proudly ensconcing it midway in the hallway of each new address. I found it to be extraordinarily uncomfortable for a call that lasted more than a couple of minutes which probably played right into my mom’s parental plans. By the time I was a teen it had become intolerable to be tied to such a public place when talking seriously with my friends. I eventually convinced my mother to invest in a long cord that allowed me to stretch the phone into one of the rooms located along the hallway where I might close the door to gain a small sense of privacy. Even then my brothers mischievously found excuses to walk in and out of whatever entry way I had chosen, gleefully stepping over me and laughing at my attempts to enjoy a bit of dignity during my conversations.

I was at least happy that our family phone was not located in the kitchen as I had seen in some other homes. I tried to imagine attempting to have a serious conversation in the most central part of a house. Somehow I managed to be grateful for the long cord and that provided me with a semblance of freedom from being observed while I engaged in what I considered to be quite serious discussions with my peers. The only setback was my mother’s insistence that I make my phone calls as brief as possible to keep the one phone free for the use of other members of the family.

Over time the bench that had once been a source of pride for my parents became worn. Its legs were wobbly and the brocade fabric on the seat began to fray. Almost everyone had observed my ingenious way of using the long cord to escape the prying eyes and ears of anyone else who happened to be in the hallway, and before long everyone was escaping behind one of the doors to talk. The bench sat forlornly empty and without purpose. I’m not certain when it disappeared but one day it just wasn’t there anymore. When not it use the phone sat on one of the bookcases that lined one wall of the hall.

I eventually moved out of the house and into a place of my own. It was a small apartment with a phone located in the expanse of the combined living room and kitchen. By the time my husband and I purchased our first home the age of multiple phones had arrived, so we had one conveniently hanging on the kitchen wall and one in our bedroom. Our daughters would never experience the frustration of being on full display to the family while attempting to engage in a serious conversation with a friend. Nonetheless I found myself becoming my mother as I restricted the amount of time they were allowed to spend in the frivolous pursuit of talking with people that they had spent an entire day with at school. With the invention of the portable phone that required no cord the transition to an audience free phone call seemed complete but there was so much more to come.

My how the world has changed! We actually have landline phones all over the house that are so rarely used that I often wonder why we bother having them. For now their main purpose lies in being connected to the home alarm system and serving as a backup in case of a cell phone malfunction. Whenever anyone comes to visit they arrive with their own phones which they are able to use wherever and whenever the mood strikes them. Those phones are not only a source of communication but also entertainment. They are encyclopedic in the amount of knowledge that they are able to convey with just a few strikes of the keys. The young folks using them would be appalled at the idea of having to share one device with an entire family. They can’t even imagine being tied down by a cord  that is connected to a wall. The very idea is so foreign to them that even careful description don’t convey what it was like back in the day. They laugh at the very oddity of it.

I admittedly never leave home without my phone. It is my map on the road, my guardian angel in an emergency. With rare exceptions it has made my life easier. I can call or text and almost instantly be in contact with the people I need to reach. It has kept me linked to friends in faraway places and to the happenings of the world. I now know when a child is missing or a cataclysmic event has taken place within minutes. I sit more patiently waiting my turn in some office because I have games to amuse me. I don’t have to carry a bulky camera on my trips because my phone takes and stores images of all of the places I have been. Who knew that a tiny object that fits inside my purse would have more power than the entire room of computers at NASA that were used to safely guide a human to the moon? I never imagined such a thing back when I picked up the receiver only to learn that I would have to wait until our neighbor finished her conversation on the party line that we shared. We have come such a long long way and as long as we don’t become addicted to the power of our phones, it is good.