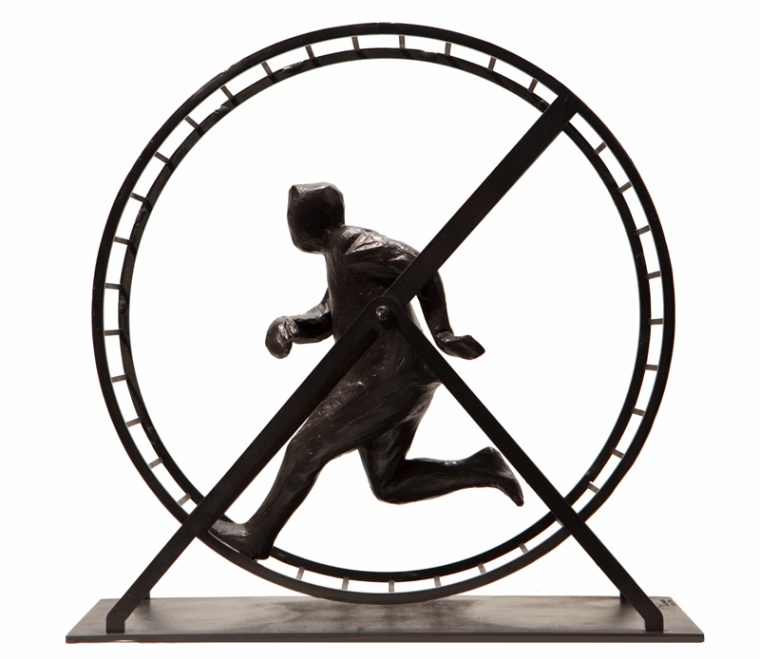 The trouble with the rat race is that even if you win, you’re still a rat. – Lily Tomlin

I was a full fledged member of the rat race for most of my life. I’d leave home before sunrise and often did not return until after dark. I would hurriedly throw together dinner or maybe even bring home burgers or fried chicken if I was really tired. Most evenings I graded papers and did lesson planning until nine or ten while running loads of wash and getting my daughters settled with their homework. My husband Mike was engaged in a similar whirlwind of work activity during the week. On weekends we cleaned, mowed and repaired and somehow managed to find a bit of time for visiting with friends and family. So it went year after year until we one day ended our labors and retired.

We were not unlike most of the people that we knew. Everyone was seemingly rushing somewhere, part of that great rat race that consumes so much of our lives. Little wonder that at the end of our toil we had grown fat and out of shape. Being healthy takes time and attention and we were barely able to fit all of our responsibilities into our calendars. The prospect of spending time that we didn’t have to shop for healthy foods and then prepare them was overwhelming, and so we often opted for frozen items that allowed us to just pop our dinner into the oven without additional effort. The weight came on us in such small increments that we hardly noticed the real expansion of our girths.

Now and again we resolved to do better. We joined Weight Watchers online or paid for membership in an exercise program or a gym. We’d do well for a time and then a rush of activities would overtake our best intentions. Those night time meetings at school or the big project at work stole away yet a bit more of our time. We were exhausted from juggling so many balls and running so constantly. It was easier to set our personal goals aside and just go with the flow that always felt so hectic but was at least familiar.

I’d get a routine of weekend meal preparation going and my mother would become ill. I’d have to tend to her needs rather than spending time in my kitchen being a nutritionist. I’d try again and again but there always seemed to be something that was more demanding of my attention. I’d just keep running on that little hamster wheel telling myself that one day I would finally find the time to do the kinds of things that would make me a stronger, healthier person. Of course that day never really came, at least not until I was face to face with a life and death situation. At that point I understood the folly of my ways.

I’ve spoken of my new found efforts to concentrate more on the well being of my body and that of my husband. His stroke has shown us that a lifetime of running at full tilt and ignoring the warning signs that we were abusing our health has lead to conditions that need not have occurred. We may be a day late and a dollar short, but now we are changing our ways in earnest. Still I have to wonder why we ignored this incredibly important facet of living for so long. In the name of being good employees, faithful family members and loyal friends we time and again put our own needs behind everyone and everything else. In retrospect it was a foolish choice.

I am reminded of the instructions for flying in which the adult passengers are always told to put the oxygen on themselves before helping their children. The reason is quite simple. If the adult passes out, he/she is of little use to the youngster. In other words it is up to each of us to prioritize the healthful habits that we need so that we will then be able to take care of everything else. If only our society emphasized this important idea regarding our health as well as the airlines do with respect to oxygen perhaps we would all be better. Sadly we openly encourage participation in the rat race as the ultimate goal of life.

I have worked for many different organizations and bosses. Some of them understood the importance of maintaining a healthy balance between work and personal needs. They were compassionate with employees who required time to heal themselves and even encouraged everyone to take care of home life first. On the other hand I have been employed by people who seemed to believe that the best workers were the ones who were willing to sacrifice home, hearth and family for the good of the firm. They voraciously ate up most of the hours in the day and chastised anyone who dared to suggest that the work was not their main priority. I watched the employees in such places fall apart both physically and mentally. Unfortunately it is not all that uncommon for people to find themselves in situations that slowly but surely begin to beat them down.

I know all too well how difficult it is to be an exemplary employee, an outstanding parent, a good daughter, a devoted wife and also someone who cares for herself. I have been a bonafide member of the rat race and I know how debilitating it can be. In the midst of the daily run it is often difficult to even know where the pack is leading. We just follow out of habit and tell ourselves that it is the right thing to do because we have been taught from birth to follow that old ethic that we achieve success through hard work, discipline and sacrifice. The trouble is that we  misinterpreted the idea when we set aside the aspects of living that make our bodies and minds function more efficiently.

One thing that I appreciate about the younger generation is that more of them appear to understand the importance of good nutrition and regular exercise. They create blocks of time to take care of themselves and that is a very good routine to develop. I have a grandson for example who schedules his time in the gym just as he does his college classes. Exercising is a regular part of his day that is as important to him as eating, sleeping and studying. If he maintains those kind of habits for a lifetime I suspect that he will have fewer health problems later. He is quite wise to set his priorities now so that they become second nature.

I suppose that it is never too late to change and I am certainly in the process of doing so. I’ve learned from my own mistakes and I don’t plan to turn back. If I were to give a single bit of advice to those of you who still find yourselves being torn asunder by the stresses of daily living, it would be to jealously guard  the special times devoted to the sole purpose of making yourselves healthier in body and mind. You may have to learn how to say no to some of the multitude of requests that come your way, but stand tall and don’t let anyone intimidate you. Step away from the rat race and you will finally see the road ahead.