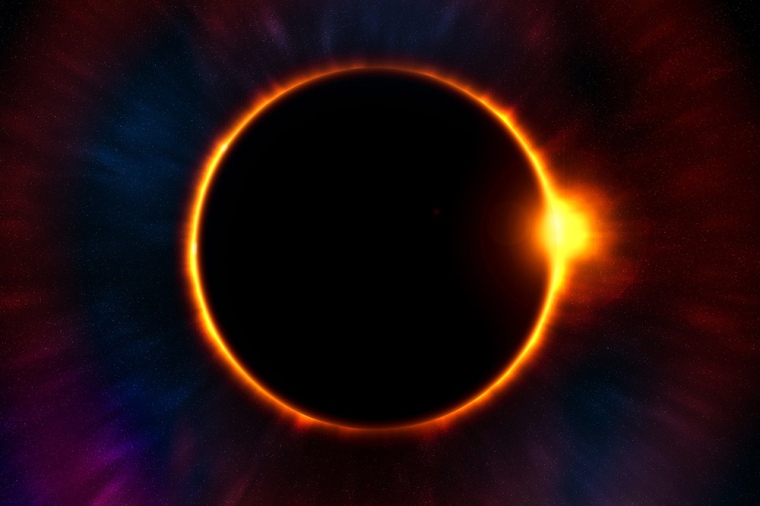 This happened for a few hours on August 21, 2017. Much of the United States of America was profoundly united by the majesty and mystery of a total eclipse of the sun. I wasn’t lucky enough to be in the path of totality, but the images of a 66% eclipse that I saw in the sky were breathtaking nonetheless. Somehow I was reminded of how infinite and mind-blowing our universe truly is, and how small we are when we consider its expanse. Still, the fact that we have unlocked so many secrets of the cosmos with our mathematics and science is humbling to realize. We were all ready to witness this historic event because astronomers have mastered the tools to make such predictions. We saw images streamed from NASA and wore glasses that allowed us to look heavenward without doing damage to our retinas. Later we shared our experiences with people in distant places using technology that is as amazing as nature itself. Somehow this incredible moment left me in awe of not only the heavens, but also the intellect of mankind.

One of my favorite all time books is The Ascent of Man by Abraham Bronowski. It is a chronicle of the leaps of human knowledge that have brought us to the advances that we often take for granted today. The miracles of farming, construction, astronomy, physics medicine and technology that we enjoy are abundant, and provide us with a standard of living unimagined even two generations ago. Nonetheless we must be careful of relying on our hubris. Just as gazing at the sun during an eclipse without protective eyewear may cause us to go blind, so too will thinking that we unequivocally have all of the answers cause our downfall. We would do well to consider that our place in the universe is but a tiny speck. There is so much that we have yet to learn, but happily there are minds of geniuses working to continue to expand our knowledge just as they always have. I marvel at the thought of what is yet to come.

I sometimes like to consider what developments I would like to see. It would be so wonderful to be able to eliminate mental illnesses, or at least control them effectively. How nice would it be to have an injection or a pill to eliminate addictions to drugs, alcohol or food? I dream of a time when we are able to produce forms of energy that do no harm to our environment and are readily available to anyone anywhere. I’d love to see advances in food production that would eliminate hunger in all corners of the world. The possibilities are endless, and often the most humble sounding discoveries are the ones that have the greatest impact on society.

We still have so much to do with regard to bringing peace and synergy to our world. I often feel that the best possible human advances may one day come in the way we live together in harmony. We still have so much work to do in that arena, but if we can come together to watch the moon blot out the sun, then maybe the potential for humanity to ascend to a higher level of integration is truly there. I’d like to believe that this is not just an idealistic pipe dream.

At the moment in which the eclipse in my town reached its apogee I felt a kinship with the universe and its people. After all it seemed as though we are all more alike than we are different. I viewed the event in a park surrounded by hundreds of fellow amateur astronomers. Everyone on that day in that place was smiling. Somehow there was no room for jealousies or comparisons of one another. There was a definite feeling of unity and a spirit of cooperation. Everyone cheered the passing of the moon in front of the sun and declared that it was a remarkable sight that they will never forget.

We all agreed that we can’t wait for the next big event that will take place in the USA in 2024. That time the totality will happen right in my home state, and I plan to watch it with my children and grandchildren, By then they will be either in college or all grown up  with jobs and maybe even families of their own. The sun will have risen in the east, the moon will have illuminated the nighttime sky and the earth will have rotated on its axis for over two thousand days. So many changes will have taken place, but our fascination with the sun and the moon and the stars will not have waned. Somehow those celestial bodies still rule over our hearts and our minds. We are as fascinated by them as primitive man was. In their presence we realize both our potential and our limitations. We long to totally understand them and we marvel at their power, or at least we should.

Our planet is but one infinitesimal part of a universe so vast that we cannot truly imagine it. We measure our history with the rising and falling of the sun.

—- A poem from Suzy Kassem