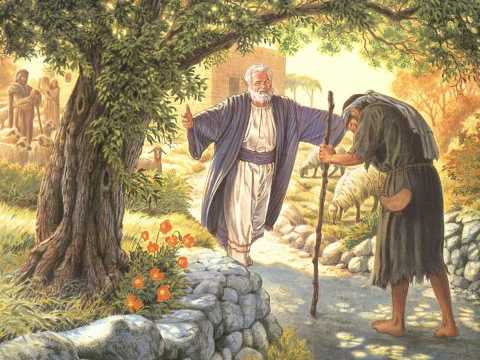 I grew up in Catholic schools and we were not exactly Biblical scholars. I understood the gist of the stories and parables in that great book, but I would be lost if I had to name the chapters and verses that contain various elements. Still I have enough familiarity with the four books that comprise the volume that I am able to relate both the history in the Old Testament and the story of Jesus in the New. What I learned is that Jesus was all about love and redemption. Over and over again he pushed back against the rule oriented Pharisees and preached the importance of understanding that He had come to remind us all that God is open to each and every one of us and that it is never too late to ask for forgiveness.

Jesus was often misunderstood by the people of His time which ultimately resulted in His being hung from a cross like a common criminal. So it is little wonder that even people who profess to be experts in the interpretation of His words might come up with ideas that appear to be more in line with the Pharisees than with Jesus. Somehow we can all hear or read the very same passages and come up with differing interpretations of them. It’s been happening for centuries and no doubt will continue as long as we humans attempt to unravel the instructions of how best to use Jesus’ instructions for how to behave toward one another.

One of my favorite parables was that of the Prodigal Son. Jesus told this story after the Pharisees and other critics suggested that He was often sinful in the selection of people with whom He associated. They disliked that Jesus was friends with tax collectors and women of dubious character and such. They worried about how He flaunted the religious laws by performing miracles on the Sabbath. They felt that Jesus too often excused bad behavior when He should have instead condemned it. What they didn’t appear to understand is that Jesus was preaching a new way of living that promised every human a pathway to amnesty regardless of how egregious their sins might once have been. Somehow large numbers of people who purport to be loving Christians have forgotten this message and instead use fire and brimstone passages from the Old Testament to defend their unforgiving stances on various issues.

The whole idea of illegal immigration, and in particular the Dreamers is a perfect example of how very religious people have somehow become unwilling to even consider the idea of forgiving those who broke the law or those who were brought to our country without consent when they were children. We have forgotten the story of the the Prodigal Son, perhaps the most powerful tale that Jesus ever related. In it he spoke of a very wealthy man who had two sons, one of whom became impatient to receive his inheritance and asked his father to give it to him immediately. The errant son took his father’s treasure and went away with it, forgetting about his family and living a profligate life. After losing everything he was starving and desperate. He came back home with the intention of begging his father to take him back as a servant to earn his keep. Instead when the loving father saw his son returning he rushed out to meet him, instructing the servants to clothe his child in fine robes. He not only forgave his son but planned a celebratory meal for him. When the other son who had been faithful to his father heard what was happening he was irate, questioning why his brother should be honored when he had been so thoughtless. The father reminded the angry son that a parent’s love is unconditional and that by prostrating himself the prodigal son had demonstrated his willingness to change and seek forgiveness.

I think of this parable whenever the subject of illegal immigration is mentioned. I realize that we cannot as a nation continue to allow people to break the law without consequence, but there are people here who came for very good reasons which we may or may not understand. They have lived peacefully among us, working hard and doing their best to fit into our society. Since we did little to turn them back initially they have little hope of returning to their native countries and finding a livelihood because they have been gone for too long. The truth is that we sat back for decades and did nothing to stop them. Now many among us want to simply turn their backs on these people and send banish them without any thought to what doing so may mean. There are even some who wish to punish their children who were brought when they were too young to even understand what was happening. Like the Pharisees so many Americans and lawmakers only see the rules and not the humanity of the situation. They shout down any plan that might rectify the status of these individuals without giving them actual citizenship, but requiring them to come out of the shadows. They speak of amnesty as if it is a dirty word rather than one that Jesus Himself would no doubt have appreciated given His propensity for forgiving people thought to be hopelessly broken.

I tend to believe that our political leaders who continually oppose all immigration plans that propose even a smattering of forgiveness are mostly concerned about losing political power. They don’t seem to realize that their unwillingness to bend and compromise even a bit is only exacerbating the problem. They spread silly ideas that they should not concern themselves with the fate of immigrants rather than the safety of Americans. They point to the lawlessness of those who would cross our borders without permission and insinuate that most who come here are criminals. They raise the fears of our citizens by suggesting that terrorists will be coming if we do not have a hard line. Instead of telling us what chain immigration is and why we have it, they just make us afraid of it. They point to criminals who came here through chain immigration as though such incidents are the norm. They constantly speak of rules that must never be broken, forgetting how often Jesus did just that to emphasize our need to be compassionate and loving. They conveniently forget the ultimate message of redemption by His death on the cross.

As I write this the government shut down for a short time because our leaders were at an impasse. A few days later they grudgingly agreed to a short term fix, but left all of the big problems for another day. Who knows how well those discussions are going to go given the fact that we haven’t had many bipartisan moments in years. We appear to no longer be able to compromise. I suspect that if our Founding Fathers had been this way we might all still be part of the British Empire like Canadians. They would have argued infinitely and gotten nowhere, which is where we are now.

There are those who want to lay blame for the state of our union and I would like to suggest that there is plenty to go around to everyone including those of us who vote. Of late we have turned our backs on anyone who has shown the desire to bring the country together for the general good. While we are bickering real people are being hurt and we are forgetting about all of those beautiful parables that Jesus taught us, and yet Jesus Himself would be loving and understanding even of those of us who have sometimes forgotten or ignored His message. Maybe the time has come to remember it the way it was intended to be.