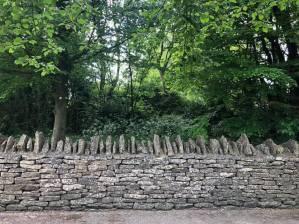 The Cotswolds are perhaps one of the most delightful areas of England. Filled with rolling green vistas, grazing sheep, fields of lavender, and quaint farmhouses the area is picture postcard delightful. We left the highway and journeyed down narrow lanes that were often devoid of traffic save for ourselves. We traveled slowly and almost aimlessly, enjoying whatever came our way, and stopping often to soak in the beauty.

The landscape was awash with wild flowers of every sort that captured our fancy and our interest. We seemed to stop every few miles to take more photos of what we saw. Along the way we encountered a trio of horses who immediately came over to greet my sister-in-law Allison when she called them to the fence that kept them corralled. They we beautiful animals and quite friendly as well. They enjoyed a snack of apples from the bag of fruit that we had brought along. It was such a delightful moment that we might have tarried much longer but we wanted to see as much of this lovely area as possible before the sun set.

Soon enough we came upon a little town called Stow on the Wold. It was a sheep shearing day but we never quite found the place where that was being done. Instead we wandered into the little town where we came upon a sweet antique shop that was filled with quite remarkable items. I found yet another piece of Willow Ware for my collection, a large platter for serving perhaps a Sunday roast. There were also some sweet framed sets of embroidered birds. My sister-in-law Becky and I liked them so much that I purchased four and she bought the remaining four along with a gorgeous antique tea set. I also found a child’s teapot for my niece, a trinket box for my granddaughter and a small dish for my daughter. Our men folk were rolling their eyes and wondering how we were going  to get all of the things into our suitcases and onto the plane for our return trip, but I already had a plan.

We had searched high and low for a tea towel or other such memento of baby Archie’s birth all to no avail when suddenly we found exactly what we wanted inside a toy shop that featured some of the most unique items that I had seen anywhere. I was also drawn to a little black sheep ornament that I decided to buy for the travel tree that I decorate each Christmas. It reminded me of the peacefulness of this part of England, but also of the hilarity of our conversations inside the car as we laughed our way down impossibly narrow roadways.

Sooner that we might have liked we left Stow on the Wold and continued our drive toward Chipping Campden, a small market town in the Gloustershire district of the Cotswolds. We were quite taken by the cottages with thatched roofs that seemed to be everywhere. Sweet English gardens stood in front of them making them seem to be right out of a fairytale. We wondered who the folks were who were lucky enough to enjoy living in such a picturesque place. It felt as though each new scene was more breathtaking than the next.

Before leaving the back roads we purchased some lavender products and walked through another quaint town but all too soon we were back on the main highway heading toward the hotel where we planned to stay the night in Cheltenham. We were quite excited to find that the Malmaison was a boutique inn that had fused old architecture with modern decor. It was far more lovely than we had imagined when we had made our reservations months before.

For some reason we were all craving Chinese food and we found a five star Cantonese restaurant not far from where we were staying. It featured a lovely setting that felt more like a perfect spot for a high tea with its chintz chairs, starched white table clothes, and delicate English china. Happily the food was scrumptious and the service was even better. We left quite satisfied and drove around town for a bit just to see what it was like.

We were quite tired from the day’s journey so we retired and slept peacefully in our beautifully appointed rooms. We rose early and ate breakfast at the hotel. We enjoyed eggs benedict, hot tea, and an assortment of rolls and jams. It was all quite yummy which ended up being fortunate because it would be many hours before we ate again. We were off and running toward Bath where we hoped to see the Roman structures built around the natural hot springs of the city.

Somehow we all agreed that we really wanted to spend more time in the Cotswolds just hiking and maybe even sitting on a porch taking in the views. It seemed too soon to be leaving such a spectacular area and somehow we secretly pledged ourselves that we might one day return until then we would have to be satisfied with our photographs and the sweet memories that filled our heads.