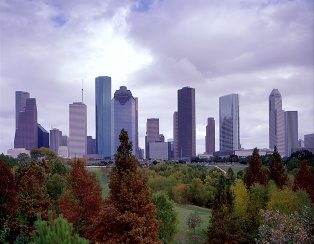 Houston is a city invented in the minds of real estate brokers and businessmen. Geographically it had no features that might have indicated that it would one day  become a mega power. It is as flat as a place can be, hot for most of the year, devoid of rivers linking it to other places. The early hucksters who first imagined building a town in  Houston often sold its potential to out of town folk with posters depicting a quaint village surrounded by mountains. When the individuals who had bought into the fake depictions arrived they usually had no means of doing anything other than staying even though they had been duped.

Somehow Houston attracted innovators and investors with grand ideas. These were men who convinced railroad magnates to tie the city into the commercial system that crisscrossed the country. They were the same types who conceived the plan of connecting Houston with the Gulf of Mexico by building an artificial route to the sea via a ship channel. The early Houstonians were visionary enough to create a university that would become known as “the Harvard of the South.” They recruited talented young doctors to found medical facilities that would grow into a world renowned center of excellence. When World War II broke out the city of Houston was poised to tackle the business of producing the necessities of battle. By 1948, Houston was a city on the move and somehow its growth never stopped. Today it is the fourth largest city in the United States and forecasters predict that it will overtake Chicago in the next two decades.  END_OF_DOCUMENT_TOKEN_TO_BE_REPLACED