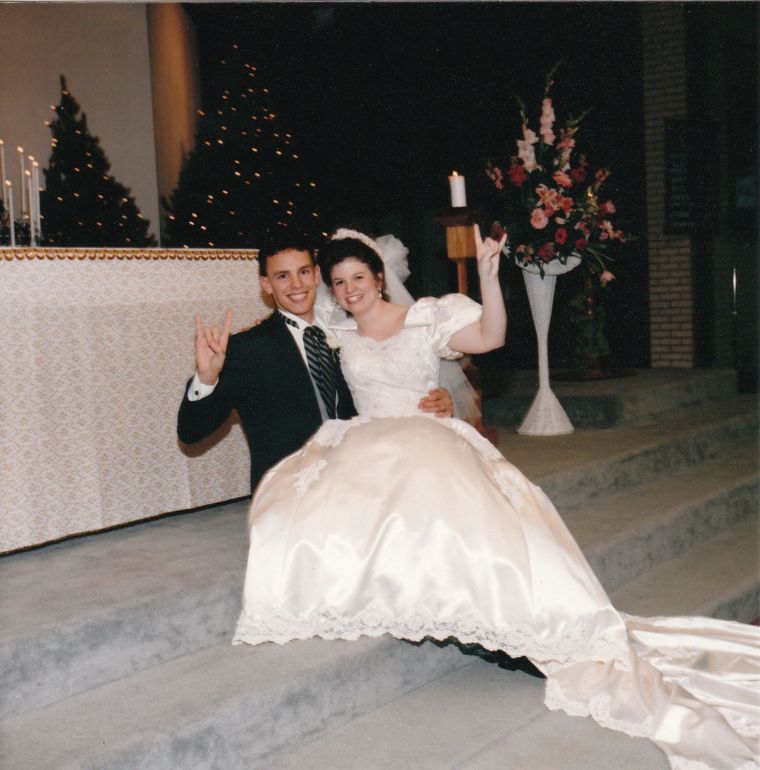 Parenting is one of the most difficult tasks that we humans attempt to master. It pains us to see our children hurting, but we know that we will never be able to completely eliminate struggles from their lives, so we teach then how to effectively deal with both trials and tribulations. We hope that our foundation will help them when we launch them into the adult world. Mostly we pray that they will know how to surround themselves with good people who love and care about them as they begin their independent journeys without us. So it was with my two girls.

Like any other parent I did my best and hoped with all of my heart that my efforts would be enough. My eldest Maryellen had always made me proud, and she appeared to have a good head on her shoulders as she left our home to become educated by others at the University of Texas in Austin. There were some shaky moments in her early days there when I received phone calls and heard the strains of uncertainty in her voice, but she managed to make it through the rough patches and secured a place for herself among friends both new and old. Along the way she met a young man named Scott through the encouragement of one of her more gregarious friends.

At first Maryellen was tentative about being more than just a good pal to Scott, but before long she was drawn to his good nature and his intellect and they began to date. Her face would light up whenever she spoke of him and I could tell that her relationship with him was far more special than any that she had ever experienced. He had a way of understanding her and treating her as an equal that pleased her. Even his gifts to her at Christmastime were astutely thoughtful and romantic. I found myself believing that she had found the man of her dreams and when I finally met him I was pleased to sense that he was a truly good person who respected and cherished her as much as I did.

Maryellen and Scott enjoyed a delightful courtship at the university, peppered with serious study sessions and fun times with a group of remarkable friends. They cheered the Longhorns at football and basketball games and enjoyed the same music and movies. Mostly they talked and realized how neatly their hopes and dreams meshed with one another. They fell in love.

I was quite pleased when they announced that they were engaged. They were both mature and thoughtful individuals who had transitioned well into adulthood. They both were within striking distance of earning degrees in the respected fields of business and engineering. Their futures were promising and together they were certain to be a power couple, but more importantly they shared values that would help them to build a life of love and devotion.

Twenty five years ago today they exchanged their vows at St. Frances Cabrini Catholic Church. It was a beautiful service shared with a crowd of friends and relatives. Maryellen glowed with the flush of love and anticipation and Scott had “the look” in his eyes that assured me that he would be forever faithful and loving to my daughter. Our family priest John Perusina said the mass and Scott’s Lutheran minister assisted with the proceedings. The bridesmaids wore blue and one of Maryellen’s childhood friends sang Sunrise, Sunset like an angel, making everyone in attendance cry as we recalled how quickly the years had gone by since the bride and groom had been children. It was a gloriously happy day that bode well for the future.

Maryellen and Scott moved to Beaumont after a memorable honeymoon in Yosemite National Park, yet another idea of Scott’s that was so perfectly suited to Maryellen. They set up housekeeping in a cute apartment and began their careers. It was a fun time and it was wonderful to see how happy they were and how well things were going for them.

Eventually Scott received an offer that he couldn’t refuse from a firm in Indiana and so the two of them were on the move. They purchased a lovely house in Lafayette and began to explore the midwest during their free time. They were only two hours away from Chicago and so that exciting city became a frequent destination. It was a time filled with new adventures and new confidence for them when all of us realized that they had indeed become a powerful team.

Four years after they married their first child, Andrew, was born and our visits to Indiana became ever more frequent as we enjoyed visits with our grandchild. I always felt so intensely happy to see the relationship between Maryellen and Scott growing ever stronger and thus it would be as one year flowed into the next and three more children joined the family as they moved again to Beaumont and finally back to the Houston area.

Maryellen and Scott have been models of love and dedication. They are beloved pillars of of their community known for their dedication to being exceptional parents and generous neighbors. They inspire others with their devotion to each other and to their sons. Together they have weathered the rollercoaster ride that is life and managed to overcome every challenge that appeared on their horizon.

In a very troubled world where it almost seems old fashioned to hold tightly to values and traditions Maryellen and Scott Greene have proven that the power of love is still one of the most priceless treasures that any of us might possess. For twenty five years they have steadfastly honored one another and passed on their mutual love to their sons who are growing in the same wisdom and age and grace that they have so beautifully exhibited.

Somehow I am overwhelmed by the rapid passage of time. In my mind they are still the twenty something young adults with so much hope in their eyes and a whole lifetime ahead of them. They have done a remarkable job of cherishing the promise that they made on that day in the glow of tiny lights from the Christmas trees on the altar. They have fulfilled all of their vows and done the hard work of keeping the flame of their never ending love alive. It makes my heart burst with joy to know that they are such incredibly fine people.

Happy Twenty Fifth Anniversary, Mr. and Mrs. Greene. May you enjoy many more wonderful days together as you share a special love. You are a blessing to all of us.