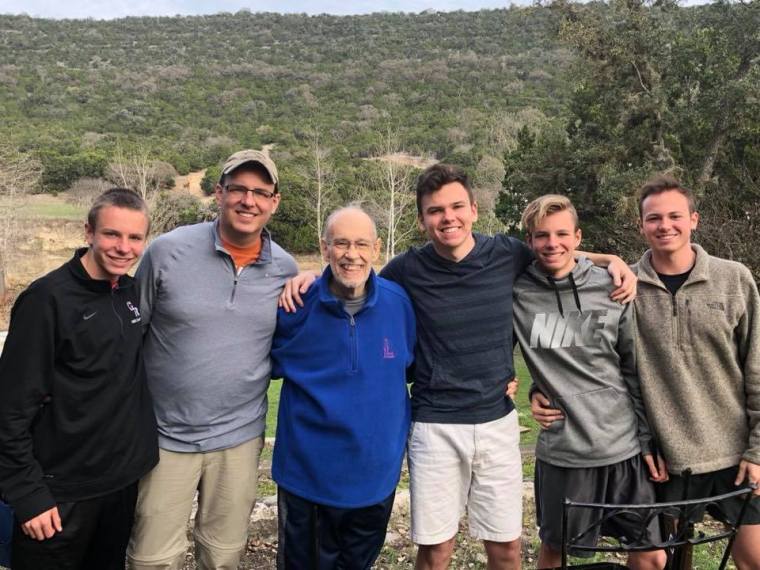 My son-in-law, daughter, and grandsons are in a state of grief. Their beloved Boppa died on New Years Day. Boppa, otherwise known as Gary Greene, was a good man who loved his wife without reservation and cherished his children and grandchildren with every fiber of his body and soul. He was also filled with a spirit of fun. He believed in squeezing as much joy out of each day as humanly possible.

Gary was born in Houston, Texas and grew up in an area not far from the Texas Medical Center. He graduated from Bellaire High School and then set out for the University of Texas where he earned a degree in Chemical Engineering. While he was a student there he met his wife Barbara and the two of them fell in love, married and set out on a five decades long adventure that took them all over the United States and around the world. In fact, traveling became one of their greatest joys along with their two children Scott and Terri.

Gary worked hard at his jobs, dedicated to making a comfortable life for his family. He was a Texan through and through but whenever his companies asked him to move he dutifully went where he was needed and turned the relocation into an opportunity to learn more about different places. All the while he always found time to support his children’s interests and to open his home and his heart to their friends. His loyalty to his beloved Texas Longhorns never wavered either no matter where he roamed.

Gary eventually found his way back to Texas as his working years slowly came to a close. He retired to the Austin area and threw himself joyfully into the role of being a grandfather. He took each his six grandchildren on special trips to places like London, Germany, Washington State and such. A few years ago he planned a gala vacation right after Christmas for the entire family in Mexico. On another occasion he took everyone to Hawaii. Every excursion was punctuated with his impish sense of humor, exciting activities and lots of ice cream.

Gary rarely missed the yearly reunion of his wife’s family on Thanksgiving Day. He reveled in the games and songs and loving significance of the event and became known as the resident genealogist, creating expansive charts outlining the history of the family and recording all of the new births. For many years he and his crew were the reigning champions of the washer contest, and he became as loved by his extended family of in-laws as he was by Barbara and his children.

Gary had a sonorous voice that might have served him well as a radio broadcaster. He used it often to tell his many stories and jokes. He also enjoyed singing and had hours of fun in a barber shop quartet. He and Barbara even learned how to square dance when he demonstrated yet another unexpected talent.

Most of all Gary enjoyed watching the birds that live around us. He often rose early in the morning and walked quietly through wooded areas with his binoculars and a scope to catch a glimpse of feathered creatures. It was a relaxing hobby that was so in tune with his affection for nature and the joy that spending time outdoors always brought him.

Gary had been a leader when his son Scott was in the Boy Scouts. He never lost his interest in the remarkable training that the organization affords young people. He often wore his regalia and badges when his grandsons moved up through the ranks in their own quests of excellence in the scouts. Nothing made him prouder than watching them grow into fine capable young men with amazing skills and a love of our earth and each other.

In many ways Gary Greene was an old fashioned kind of man who earnestly embodied the traits of a Mr. Rogers or a Jimmy Stewart. Family was paramount to him and he enjoyed introducing first his children and then his grandchildren to the places and skills and ideas that he had known as a young man. He taught them how to drive and how to fish. He showed them how to respectfully handle a BB gun. He played games with them like Spoons and taught them to love listening to John Denver. He took them rafting down rivers, horseback riding in the country, and zip lining in exotic places. Mostly though he just loved each one them for whomever they chose to be.

There is great sadness among the members of Gary Greene’s family. He has died after a years long struggle with cancer during which he showed them what true courage really is. He slowly lost his ability to walk and his body was riddled with pain, but he continued bringing fun into their lives as long as he could. He has left a big hole in their hearts, but the legacy of joy and optimism with which he approached each day will sustain them for all of their years to come.

Gary Greene really lived and loved. The torch of all that he believed has been passed to his children and grandchildren to remember and honor who he was with their own lives. He demonstrated to them all of the character that one needs to live happily and well. He will no doubt live on as they emulate his spirit, the greatest gift that anyone might ever leave on this earth.