“It must be true. It’s on the Internet.” 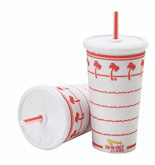 Gossip and rumors have been around for centuries. Much like feathers being loosed from a pillow they are almost impossible to contain or retrieve once they have been set free. Even when they are found to be false their poison and impact lingers. Social media has been an especially bad breeding ground for ideas and slanders that are not always grounded in truth. It’s so easy to post a photo or a statement and watch it go viral. The hard part is retracting it when the truth proves it to be false.

I see such posts constantly. I have believed information that was later proven to be a hoax. There are so many examples of urban myths that somehow become accepted as facts. One such post has been making the rounds for almost five years. It is a photo that depicts an In and Out cup bearing the phrase “Hail Satan” on its bottom. The image is actually a photoshopped creation that was initially intended to spoof the In and Out Burger practice of putting biblical references on cups. Over time it became an indictment of the owners of the burger chain as devil worshippers. The truth became lost in the furor with individuals vowing to never purchase another burger again. Now it is not uncommon to see the picture on Facebook walls with commentary about how horrible the In and Out Burger franchise must be.   END_OF_DOCUMENT_TOKEN_TO_BE_REPLACED