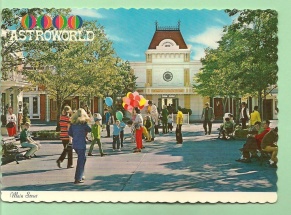 I still remember the first time I went to Astroworld. My girls were young children. I was thin and still fairly cute. My mother had no gray hair and lots of energy. We set off together on a hot summer day, not quite sure what we would find. After parking in a lot near the Astrodome we caught a ride on a trolley that took us over a bridge across Loop 610 and right to the front gate of a land of fantasy and adventure. We were as excited as if we had been at Disneyland. We could hardly wait to purchase our tickets and get inside as we heard music and smelled popcorn and candy.

Somehow the day got away from us. We rode and ate and watched shows until someone was announcing that the park would be closing in just a few minutes. We had forgotten about every worry and care that lay outside. It was as though we had magically been transported to a place untouched by anything but joy. If nobody had closed the park I suspect that we would have stayed all night long. As it was our energy waned as soon as we sat down in the car. The girls fell asleep on the way home, no doubt dreaming of all that they had done and seen on that glorious day.

We would return to Astroworld many times over and every single visit was filled with so much fun. Eventually my children turned into teenagers who felt that they would best enjoy the park in the company of friends rather than with me. If they had been good during the school year, which was always a given, I purchased season tickets for them. Many times I let them off early in the day and returned at night to fetch them back home. They were always giggly and full of tales of the day’s adventures. They met up with friends and talked with kids from other parts of town. They knew the rules and never gave me a bit of trouble. I always loved that they had a great place to go where I didn’t have to worry about them.

Eventually they grew out of their love affair with Astroworld. They were busy attending college and starting their own adult lives. Still they remembered those times when they rode the roller coaster over and over again until they were almost breathless. They would never completely forget Astroworld. In fact, I suspect that they looked forward to the day when they might take their own children to the park. They would tell them of their own adventures and the times when they even worked there.

Spending summer days at Astroworld had been a tradition for so many Houston kids for so long. Generations grew up there. We all took it for granted that the park would always be there. Somehow it never occurred to any of us to notice that things were changing. We simply did not see the end of an era coming, but end it did. Ten years ago Astroworld closed forever and a sadness settled over the place that had once been the stuff of dreams and so much fun.

We couldn’t understand why the park closed. There were stories of the land being too valuable to dedicate to a business that had supposedly begun to lose money. Some said that the crowds had become rowdy and that parents no longer felt safe leaving their youngsters there for the day. Still others insisted that people had simply lost interest in the park. They claimed that it didn’t provide as much excitement as it once had. They insisted that the park had been doomed for some time. Just as the city outgrew the Astrodome, so too had it grown weary of the amusement park that stood nearby.

I remember feeling a so many emotions when I heard the terrible news. I was stunned but mostly saddened. For a time I hated driving past the old park as it was slowly but surely demolished. It was almost freakish to see it rotting before our very eyes. I wondered what would take its place and thought that it would have to be something fantastic. Otherwise there would have been no point to tearing down such a wonderful place. When nothing of substance was built on the vacant land I actually became angry. I felt as though something precious had been stolen from all of us who lived in Houston for no real reason. It seemed to be such a travesty.

It has now been ten years since the last person walked out of the gates for the final time. For me it has been such a loss that I actually thought it had been decades since Astroworld was no more. Surely a whole lifetime had passed. It just has never seemed quite right. I still see the lights and hear the music, the crowds, the screams of delight. It was so glorious in its time. How could things have gone so wrong? The park was supposed to live forever!

I still hope that one day there will be another place in the Houston area where families might enjoy respite on a summer’s day. We shouldn’t have to drive to San Antonio or Dallas for our amusement. There have been whispers of new places opening but nothing yet has actually happened. My nephew who is a roller coaster aficionado is now working with a company that is planning to build a new amusement park but I know little about it. Hopefully it will be enough of a hit that it will grow and become as much of a tradition as Astroworld once was. Until then all we have are those memories and oh how wonderful they are!

My daughters are now older than I was when I first took them to Astroworld. My mother is gone. My knees are creaky and cause me to walk more slowly. So much has changed  but I swear that if I were able to spend just one more day in the Astroworld of old I would  surely become young again. Those of us lucky enough to have had that glorious experience will always remember that feeling of being caught up in the vortex of a special world where time stood still and nothing could possibly steal our joy. The memories are so clear and so wonderful and fortunately nobody will ever be able to tear them down.